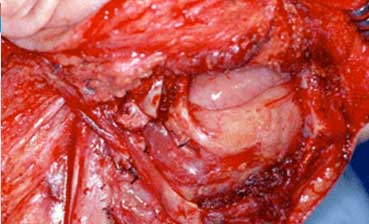 A Neck Dissection is an operation designed to remove groups of lymph nodes from the neck for treatment of cancer that has actually or has potentially spread from a primary site in the head and neck to the regional lymph nodes.

The neck is divided into seven different levels of nodes as seen on the diagram below. Primary tumours spread (metastasise) to different nodal groups depending on their site. As cancer progresses metastases spread from primary eschelon nodes to nodes further afield.  For example, skin tumours from the lip and anterior face tend to spread to facial and sudmandibular/submental nodes (level I) intially. As the disease advances lower neck nodes tend to become involved.

The number, size and position of lymph nodes involved by tumor is prognostically important. ie. The larger and lower in the neck the nodes are the worse the prognosis. Cancer also has the ability to grow beyond the confines of the lymph node into surrounding soft tissue. This phenomenon is known as extranodal extension and it is also a bad prognostic factor. A larger node has a higher  chance of extranodal extension.

The levels of lymph nodes in the neck used for staging metastatic head and neck cancer.

The types of Head and neck cancers that readily spread to neck lymph nodes include:

There are two types of Neck Dissection and several subtypes within these two groups:

Comprehensive neck dissections invlove removal of all five lateral lymph node levels and are usually performed for clinically detectable neck metastases particulary if these are multiple, large or involve a number of levels. In thyroid cancer metastases this type of neck dissection would be reserved for nodal disease that invaded surrounding structures.

The Radical Neck Dissection described initially by George Crile in 1906 involves removal of lymph node levels I-V, the sternocleidomastoid muscle, the internal jugular vein and the spinal accessory nerve. The Modified versions of this operation involve sparing one or more of the non lymph node structures. This can only be done if it is oncologically feasible and it usually means sparing the spinal accessory nerve which is the only “functional” aspect of this procedure. The Extended Radical Neck Dissection refers to a similar operation but also involves removing other surrounding strucutres that are involved by tumour including skin, prevertebral muscle or mandible.

During the 1960’s there was a paradigm shift in the management of neck lymph nodal metastases. Bocca and others realised that the lymph nodes were arranged within fascial envelopes in the neck and were not present in the muscles , nerves or veins. It was demonstrated that the fascial envelopes containing the metaststatic nodes could be removed with preservation of the functional structures if those structures were not directly invaded by metastases. Recurrence rates were no different to more radical procedures but the morbidity of the “selective” procedures was shown to be less.
It also became evident that, with many head and neck cancers, positive nodal disease was present before it was clinically obvious. Each primary cancer site was demonstrated to drain to lymph nodes in predictable levels of the neck as shown in the above diagram. Treating these occult metastases before they became enlarged nodes was shown to improve survival.
Selective Neck Dissection is now the procedure of choice for treating occult or early clinical neck metastases.

Neck Dissections are either performed in isolation or in association with resection of the primary lesion and the approach may vary depending on the site of the primary. Incisions are usually made from the region of the mastoid tip passing in a curved fashion below the jaw forward into the submental region. there is frequently a descending limb that passes from the mid point of the superior incision down towards the clavicle. Flaps are raised in the superficial muscle layer (platysma) of the neck. The lymph nodes and other structures are then removed with preservation of vital nerves and blood vessels. At the end of the procedure he wound is closed over suction drains.

It is important to remember that although there are many potential complications these are rare.