Neck lumps are very common and they are mostly innocent. Lumps in the neck are usually reactive neck lymph nodes or thyroid nodules but they can also, rarely,  be cancer. I have presented a systematic method of evaluating neck lumps to determine what they are most likely to be.

A neck lump that is hard, irregular, large, solid, fixed and non tender is likely to be malignant.

Other features that help differentiate a neck lump include:
Age  and  site

One must always be aware that a lump may be a metastatic malignancy and that the first sign of the mass may be the primary site or vice versa.

In Children and young adults inflammatory and congenital lumps are most common,

In adults a persistent lump is likely to be neoplastic and malignancy must be excluded.

The only masses that characteristically develop in the Back of the Neck are superficial masses like lipomas and sebaceous cysts and vascular or lymphatic malformations. These types of masses can occur anywhere in the neck and for that matter on the body. In the post auricular area lymph nodes can be enlarged by inflammation, lymphoma or metastatic skin tumours like melanoma or SCC from the posterior scalp. An abscess can develop from a necrotic node or from mastoiditis with erosion of the mastoid bone. The middle ear will always be abnormal if the cause of the abscess is mastoiditis.

Infrahyoid masses will be mostly thyroid in origin see Thyroid Surgery. Nearly all thyroglossal duct cysts are below the hyoid, slightly left of midline, and seen in young people. Pretracheal nodes that are caused by metastatic laryngeal or thyroid tumours can also present in this region . Suprahyoid masses may be thyroglossal but are more likely to be submental lymph nodes involved by inflammation or malignancy from the skin of the lips, anterior facial skin or oral cavity, particularly the floor of mouth. Dermoids are rare developmental inclusion cysts that form in the midline during embryonic development but often do not manifest until later in life. Thyroid tissue can arrest anywhere along the thyroglossal tract and can present in the submental region. 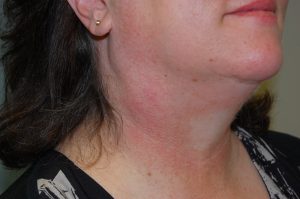 Lateral neck masses are more complex. They most commonly present in the carotid sheath in association with the carotid artery or jugular vein but they can also appear in the posterior triangle.
Solid lesions in the lateral neck are either nodal (inflammatory or metastatic malignancy) or they are rare tumours like carotid body tumours, neurogenic tumours associated with many of the nerves in the neck or rarely they can be malignant sarcomas of the deep neck tissues.

Cystic lesions may be congenital branchial cleft cysts or lymphatic/vascular malformations. However they may also be cystic malignant nodes. These are notoriously difficult to diagnose and needle biopsies are usually non- diagnostic.
Cystic nodal metastases are frequently confused with benign branchial cleft cysts and a careful history of upper aerodigestive tract symptoms is important to elicit.
Lesions in the skin and subcutaneous tissues are usually benign but skin cancers and melanoma can occur as cutaneous nodules.
Nodal lesions in the posterior triangle and supra-clavicular area are uncommon. Metastases to this area either come from skin lesions in the posterior scalp or nasopharyngeal carcinoma. Typically TB can affect lymph nodes in this area. Atypical TB in children tends to affect level I nodes in the submandibular area. 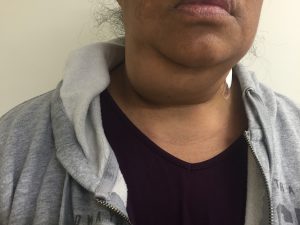 Lumps in the submandibular area are usually related to the submandibular gland. Obstruction of the duct by stones or sludge typically presents as painful swelling associated with eating or even with the thought of food. The swelling will generally resolve over a period unless an ascending infection develops. Sometimes the stone can be felt in the duct in the floor of the mouth. Massaging the gland rather than producing a good flow of clear saliva often produces a small amount of turgid saliva or none at all.

Lymph node metastases to this area are either from lip or anterior facial skin cancers or from tumours on the oral tongue, floor of mouth or buccal mucosa.

Ranula, from the Latin “Rana” meaning frog, are mucous extravasation pseudocysts from the sublingual gland. They usually present as a cystic swelling in the floor of the mouth but they also may present as a soft fluctuant swelling in the submandibular region when they “plunge” through the mylohyoid muscle. Aspiration of mucoid saliva form this lesion confirms the diagnosis. They have characteristic CT findings and are treated by trans-oral removal of the sublingual gland.

Lumps at the angle of the Jaw 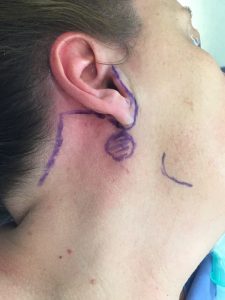 Lumps at the angle of the jaw are often related to the parotid  gland  and are either lymph nodes or salivary gland tumours. Most parotid gland tumours are benign but around 20% are malignant. NZ has a high incidence of  skin cancer to that spreads to lymph nodes and in the parotid and our most common parotid malignancy is metastatic skin squamous cell cancer  (SCC) followed by melanoma. See Salivary Gland Surgery
Congenital cysts can also occur in this region and they  generally originate from the first branchial arch.

Normal structures that are sometimes interpreted as neck masses