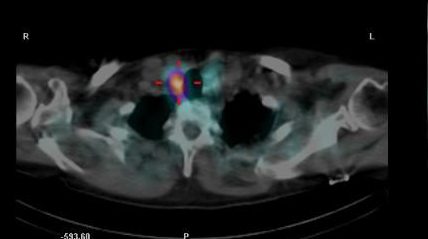 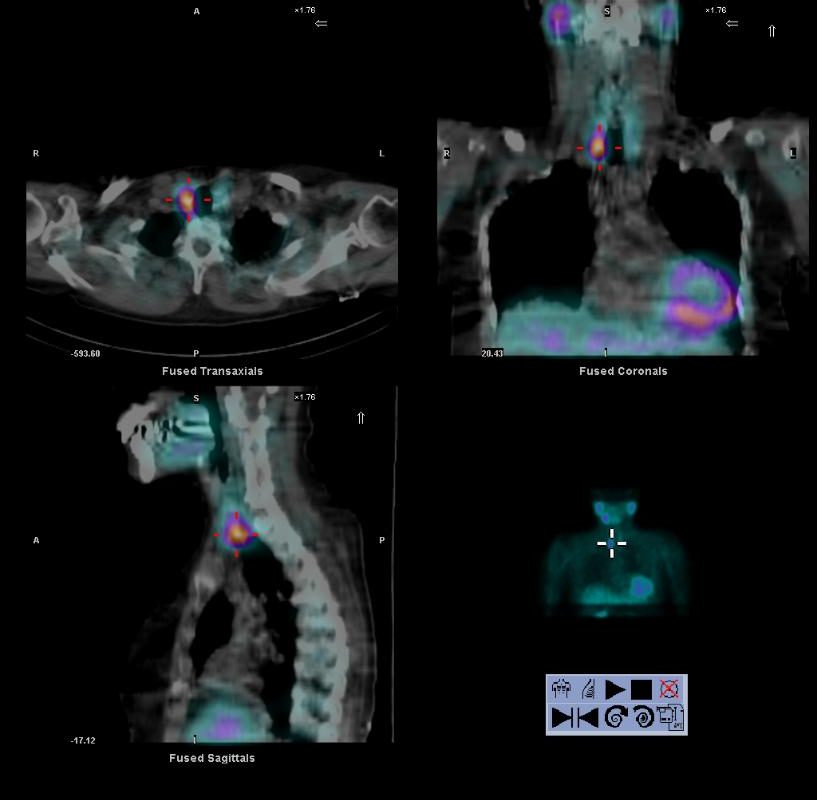 Parathyroid surgery is indicated in hypercalcaemia – the medical word for a high level of calcium in the blood. This condition can occur in a number of different ways. The most common cause is primary hyperparathyroidism. (Over-active parathyroid glands, parathyroid disease)

Parathyroid Glands are usually four in number, they are quite small, only 4-9mm in size and they weigh only 40-70gm each. Typically they are closely associated with the thyroid gland and they are in predictable positions. The superior or upper glands are at the back of the thyroid at the level of the voice box (larynx). The inferior or lower glands are at the level of the bottom of the thyroid gland near the windpipe (trachea). Occasionally there are variations in the anatomy of these glands and they can occur in other positions in the neck and very rarely in the chest. 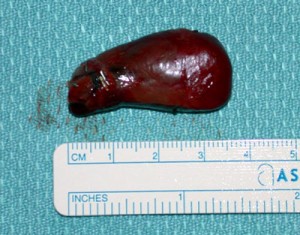 Most patients who have hypercalcaemia do not have any symptoms and the condition is diagnosed on a  blood test that shows a higher than normal calcium level in the blood. Some people do, however, have symptoms and these may include: aching in the arms and legs, osteoporosis and bone fractures, kidney stones, stomach ulcers and abdominal pain and even mental confusion. There are also a range of other more vague symptoms which may be caused by high calcium these include: dehydration, high blood pressure, tiredness and depression.

If you have been diagnosed with a high calcium level in the blood your doctor will organise some other tests which may include:

The condition can usually be differentiated from other conditions that may cause elevated calcium levels on these tests alone.

Occasionally drugs are used to temporarily bring down the level of calcium if the patient is very symptomatic. The only definitive treatment, however, is surgical removal of the overactive parathyroid tissue.

Surgery for hyperparathyroidism is a highly successful procedure with a very low complication rate if performed by an experienced surgeon.

The object of the operation is to locate and remove the overactive parathyroid tissue (usually one gland). In the past surgeons had the try and identify all four glands to ensure that only one was enlarged , they also used ultrasound, CT and MRI scans to try and localise an enlarged gland before the operation. These techniques were unreliable and the operation could be long and have increased risk of complications. There are some recent techniques that have been developed to help the surgeon to localise the abnormal gland both prior to and during the operation, which have allowed smaller incisions, shorter operations and more reliable outcomes. These include: 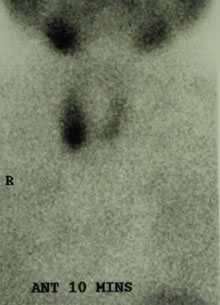 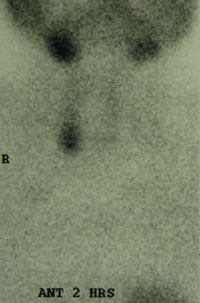 a low dose radioactive label is attached to a protein that is taken up by overactive parathyroid tissue. The protein is injected and scans are taken at 10 minutes and 2 hours. The technique is quite reliable in cases where there is one overactive gland (90% of cases).

During the operation, while the patient is asleep blood tests are taken and sent urgently to the laboratory where they are put through an analyser that measures parathyroid hormone within a few minutes (rather than hours that it used to take). If the overactive parathyroid tissue is removed the level will drop significantly after 10 minutes. This is very reliable and correlates well with long term cure. Armed with these techniques an experiences surgeon can potentially increase the accuracy of exploration, reduce operative time, make smaller incisions and lower the complication rates for the surgery. 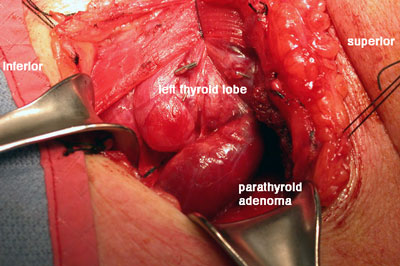 Left inferior parathyroid adenoma being dissected in a capsular fashion

The recurrent laryngeal nerve and the external branch of the superior laryngeal nerve are close to the parathyroid glands  and supply  muscle function to the larynx (voice-box) .  Injury to these nerves during parathyroid surgery can change the character of your voice. This is very uncommon particularly in an experienced surgeons hands and any change at all  is usually temporary. Inraoperative nerve monitoring (IONM) is used with an electrode on the tube that sits in the windpipe between the vocal cords used to keep you oxygenated during surgery. The nerves can be stimulated and signals will be recorded on the electrode. This offers information about the electrical integrity of the nerves that adds to the visual information of seeing an intact nerve.

Following parathyroidectomy the calcium levels in your blood can fall. Calcium is important for nerve and muscle function and if this happens you will need to take calcium tablets. This is usually a temporary problem and the glands usually start to function again after a period.

Bleeding can sometimes occur after the operation. If a haematoma develops you will need to return  to the  operating room for drainage.

Parathyroidectomy is not usually a painful operation, there may be some minor discomfort with swallowing and neck movement following surgery for a short time. Simple pain relieving medications are very effective.

Following the operation you will stay one night in hospital. I will check serum calcium and PTH levels during your stay. You can resume normal activity in one to two weeks.