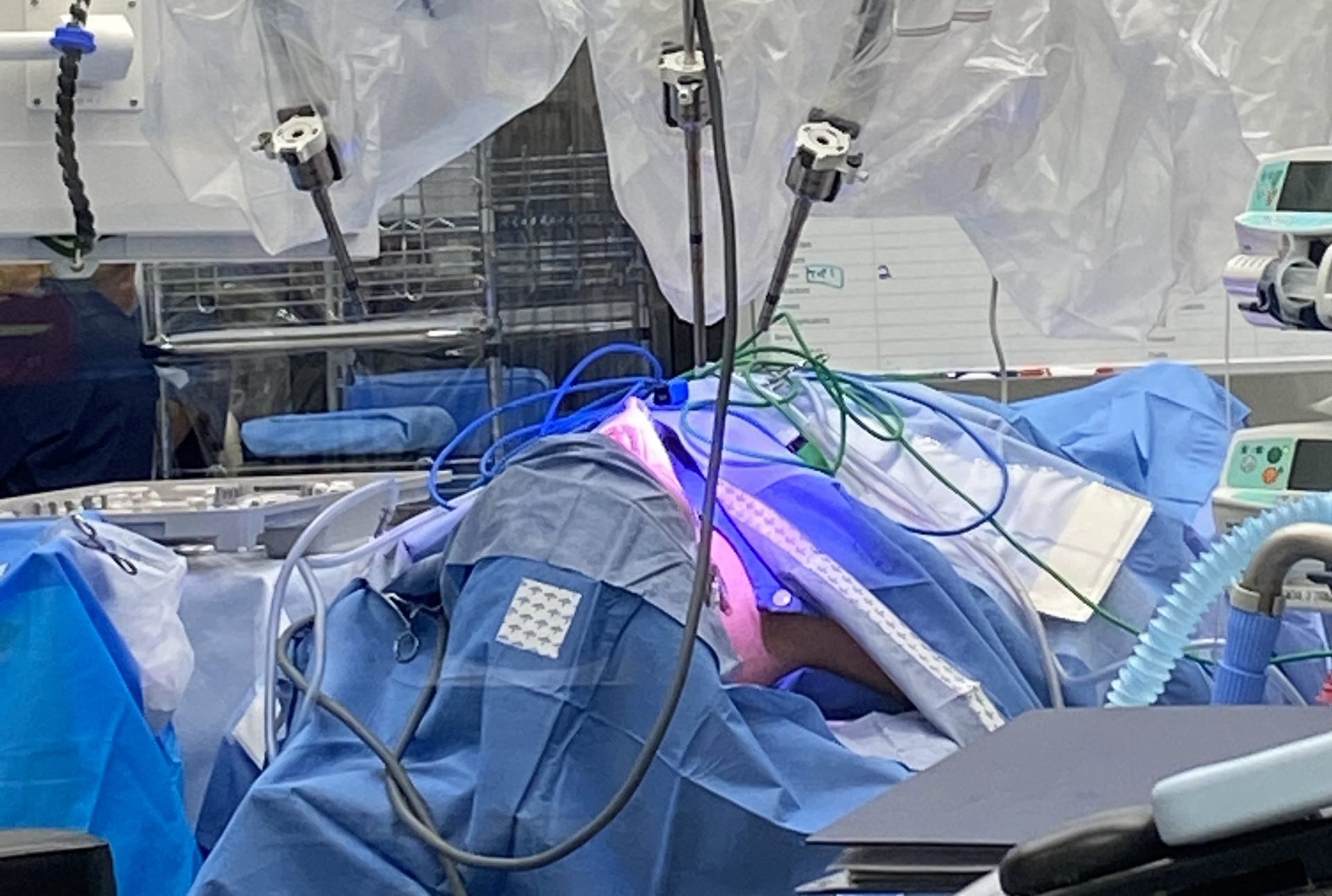 There has been a two fold increase in the incidence of throat cancer (tonsil and base of tongue) over the past 20 years in New Zealand along with many other western countries. Most other mucosal cancers in the upper aero-digestive tract (UADT) in the same countries are decreasing in incidence mainly due to a significant reduction in tobacco smoking. The cause of the increase in these cancers in 80-90% of cases is a wart virus  called Human Papilloma Virus (HPV). There are around 250 HPV subtypes and several have been associated with cancer. The type associated with oropharyngeal SCC (OPSCC) is mainly type 16 but types 33 and 45 are also implicated. Type 16 is also implicated in cervical cancer

A  study in the USA showed that over  a 20 year period up to 2010, the rate of HPV detection in oropharyngeal tumour specimens increased from 16% to 70%,(1). The most affected population are Caucasian males in the 5th to 6th decade with men 4 x more likely to get this disease than women. The virus mostly responsible is HPV type 16, one of the HP viruses best known for causing cervical cancer and the rising incidence of throat cancer  is thought to be due to an increase in oral sexual practices. Males are more at risk as vaginal secretions have higher concentrations of the virus than the surface of the penis.(1)

Members of the population are exposed to the virus in late teenage or early 20s and in a small percentage of people the virus can persist for an extended period as demonstrated by salivary analysis. Studies done show that these people have around a 25% risk of developing HPV related oropharyngeal cancer (2)

Patients are generally younger, educated and non smokers. Based on unpublished Auckland data, half of the patients present with pharyngeal symptoms such as a persistent sore throat often with pain radiating to the ipsilateral ear or with expectoration of blood. They are noted to have an ulcerating lesion either in the base of tongue or tonsil on inspection palapation or flexible endoscopy. The vast majority of these are small lesions generally , 4cm in size. The remaining 50% present with one or more lumps in the neck, usually in level 2 in the region of the jugulodigastric node and then next most frequently in level 3. (see image 1) The lumps represent metastatic involvement of lymph nodes and can be bilateral. These patients frequently present without any pharyngeal symptoms and can have very small primary lesions that are seen either after careful evaluation of the oropharynx or after histological examination of a biopsy specimen. Some have no identifiable primary lesion and are classified as “Unknown primary”

Fine needle aspiration biopsy (FNA) of an abnormal node will frequently demonstrate malignant cells but, as many of these nodes can be cystic and therefore not yield viable cells, a non diagnostic aspirate should be viewed suspiciously. Repeating the biopsy under ultrasound guidance often adds further information. Biopsies should also be taken from an identified primary or from the tongue base and tonsil in a patient who presents with nodes and no obvious primary. This usually needs to be performed under anaesthetic and often requires one or both tonsils to be removed. The tissue is stained for a immunohistochemical marker called P16 which is a surrogate marker for the HP virus, patients who have HPV related tumours are P16 positive. FDG PET -CT Scans are then performed  to give information about the volume of the primary, extent of the nodes and any evidence of distant metastases. (see image  2) Sometimes MRI scans are used to evaluate the size of the primary tumour particularly in tongue base primary tumours. 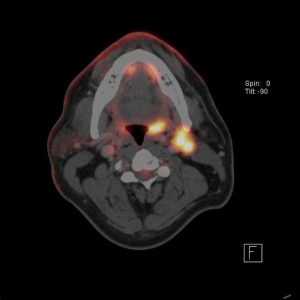 P16 +ve  and P16-ve Throat cancer  is staged differently because it has ben recognised that the prognoses for these diseases are different. Survival in P16 +ve OPSCC is far superior to that of P16-ve OPSCC for the same size primary tumours and presence of lymph nodes. Staging is based on the AJCC 8th edition published in 2017 and is shown here. OPSCC are also stratified into low, intermediate and high risk groups based on the post operative  pathological findings on the size of the primary tumour and number of lymph nodes involved and smoking status and this allows decisions to be made regarding de-escalation of adjuvant treatment.

Most patients with OPSCC are treated with a combination of Chemotherapy and radiation and a smaller but significant number  of  patients can be safely treated with a combination of surgery and radiation or even surgery alone in low risk cases (3). The decision for the type of treatment offered is made at a multidisciplinary clinic. The treatments seem to have similar outcomes with respect to disease control and the decision often rests on what the impact of the treatment is likely to be on the patients function.

There is conclusive evidence that patients with HPV related throat cancer  have a much better prognosis than those with chemical carcinogen induced HPV. The respective 2 yr disease free progression survival (PFS) rates are 95% vs 65% for HPV vs non HPV SCC oropharynx (4). This also has an impact on the treatment chosen as long term side effects need to be carefully considered.

Trans Oral Robotic Surgery (TORS) is established as a highly effective, safe and superior surgical modality for treatment of Oropharyngeal SCC. A Multicentre randomised trial in which patients were stratified into low, intermediate and high risk based on disease factors and smoking history demonstrated that 2 yr PFS rates were between 94-96% in the low and intermediate risk groups treated with TORS oropharyngectomy alone (low risk) or in combination with  low dose post op radiotherapy (intermediate risk) (3). This treatment was as effective as surgery combined with higher dose radiation in intermediate risk patients. (3)

In New Zealand, TORS is only available in Auckland and is offered at Southern Cross Hospitals in private only. There are DaVinci Surgical Robots at Southern Cross North Harbour and Brightside Hospitals. Dr John Chaplin and Dr David Vokes are leaders in TORS in NZ. Usually the operation is performed in 2 stages: First, the neck lymph nodes that are involved with cancer or are at high risk of involvement are surgically removed. This operation is called a neck dissection and this can be performed on one side or bilaterally depending on the site of the primary tumour and clinical presentation of nodal disease. At the same time as the neck dissection is performed, arteries that supply the area where the primary tumour is are tied off to prevent any bleeding after TORS. At a second setting, using the DaVinci Surgical Robot the primary tumour is removed trans-orally ( through the mouth). One surgeon sits at the remote console and drives the robot arms and one sits at the patient head and uses suction to clear any smoke plume and blood. Drs Chaplin and Vokes have done special training in this technique.

There is now evidence that the bivalent vaccines prescribed for prevention of cervical HPV induced cancer are approximately 95% effective at reducing oral/ oropharyngeal   infection with the HPV type 16 virus (5). Therefore is highly likely to be effective in reducing HPV related throat cancer and in NZ among other jurisdictions are prescribed not only for girls and young women but also for boys and young men. The vaccine used here is Gardasil 9 that covers 9 high risk HPV types and is given as a single dose.