Thyroid Nodules: All You Need To Know

Home head and neck cancer Thyroid Nodules: All You Need To Know

What are Thyroid Nodules?

A thyroid nodule is a radiologically distinct entity that appears different to the surrounding thyroid parenchyma usually on ultrasound scan. Nodules can be solid, cystic or a combination of these. Cystic portions are anechoic on ultrasound and they appear black with through transmission of ultrasound appearing bright at the far edge of the cyst whereas solid portions have varying degrees of echogenicity making them appear different shades of grey through to black.

Firstly, thyroid nodules are very common appearing in 3-5% of the population as a palpable lump and in 20-70% of the population on neck ultrasound. They are more common in women and with increasing age. The vast majority of thyroid nodules are benign ( non cancerous) but up to 5% of thyroid nodules will be thyroid cancers. Benign nodules are more common in areas of iodine deficiency,  in patients with a background of autoimmune (Hashimoto’s) thyroiditis and also in those who have had radiation exposure to the thyroid gland. Thyroid nodules occur in families indicating that, at least in some cases, there is a genetic basis to their development. Studies have demonstrated up to 25% of benign nodules have mutually exclusive genetic mutations that are different to those found in papillary thyroid cancers. The mutations responsible for development of thyroid cancers include: BRAF, RET and NTRK-1  in PTC;   Pax8-PPARgamma and RAS group mutations in FTC; TP53 in ATC : and RET mutations in MTC. the RET mutations in PTC are seen most often in children that have been exposed to radiation.

Small nodules are often asymptomatic but as they increase in size they can cause compressive symptoms and patients will complain of the sensation of pressure on the trachea (windpipe), the sensation of a lump associated with swallowing and even a gagging sensation. these symptoms are usually associated with nodules over 3 cm in size. As the nodules become even larger and particularly in the setting of multiple nodules as in a multi nodular goitre (MNG), patients may  experience further compression that can lead to shortness of breath, cough and wheeze. The voice can frequently be altered in this situation and patients can also have pain  if there is bleeding into thyroid nodules. Bleeding into nodules is not uncommon and patients present with the sudden onset of a thyroid lump and discomfort that settles over a few days as the nodule gets smaller. Occasionally thyroid nodules can be metabolically overactive and a patient will present with symptoms of hyperthyroidism or thyrotoxicosis including tremor, tachycardia, sweating, anxiety, heat intolerance and agitation. As lymphocytic thyroiditis is a precursor for thyroid nodularity patients with thyroid nodules may also have symptoms of hypothyroidism.

How are Thyroid Nodules Investigated?

The important primary investigations for a patient with a known or suspected thyroid nodule include and ultrasound scan and thyroid function tests.

Ultrasound is a highly accurate investigation for looking at the details of a nodule and for assessing its risk for being a cancer. There are several scoring systems that have been devised to identify the degree of risk and which nodules should be recommended for Fine Needle aspiration (FNA) biopsy, observation  or no follow up. The one in wide use in Auckland is The TIRADS system from the American College of Radiology (ACR). This system scores thyroid nodules based on shape, margin, echogenicity, density , and whether there are calcifications within the nodules. Scores range from TR1 (benign) through TR6 (biopsy proven malignancy) and then size is used to make recommendations regarding FNA. An online TIRADS Calculator makes this an easy system to utilise. A nodule with a TIRADS score of TR5 that is over 1cm in size should have a FNA similarly a nodule that Scores TR3 should only have FNA if it is >2.5cm and should be followed if it is >1.5cm. 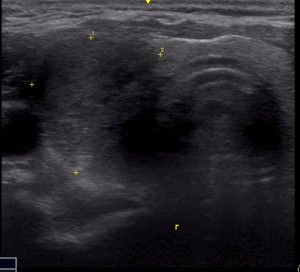 A TIRADS TR5 thyroid nodule that is solid, hypoechoic, Taller than wide, Has an irregular margin and contains punctate echogenic foci (PEF) it is over 1 cm in size and biopsy is recommended. 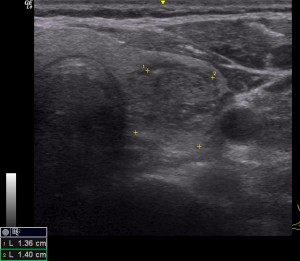 TIRADS TR3 nodule that is isoechoic, spongiform, wider than tall shape, has an irregular margin and no calcifications. As it is >1.5cm (in vertical dimension not shown)  observation is recommended.

FNA is an important second line investigation in the management of thyroid nodules. As mentioned above, the ultrasound study can allow risk stratification of thyroid nodules and identify which nodules should undergo biopsy. There are also a variety of risk assessment tools for FNA around the world and here in Auckland we use The Bethesda System developed by the NIH and adopted by the American Thyroid Association. Again, there are six categories with Bethesda 1 being non diagnostic and Bethesda 6 diagnostic of malignancy. See table 1

Table 1. The Bethesda System for thyroid cytopathology with associated risk of malignancy per category in 2009 and 2017.

Thyroid function tests are necessary when investigating thyroid nodules. It is important to know whether a nodule is overactive because if so, it would be extremely unlikely to be malignant and also thyroid surgery is an appropriate way of managing a toxic nodule. It is important also to know whether a patient is hypothyroid as the risk of malignancy is higher in patients with a background of lymphocytic (hashimotos) thyroiditis.

Go to Treatment of thyroid Nodules and Cancer